The Fabulous Counts were originally a Detroit High School group of five musicians who hung out together performing at local sock hops. Through a later chance meeting in a Wurlitzer Music Store with a slightly older guy, accompanied by his mother buying him a new guitar the group eventually became six. The Fabulous Counts, Mose Davis (Organ and Piano), Demetrius ‘Demo’ Cates with ‘Demo being pronounced as De-Mo (Alto Saxophone and vocals), Jim White (Tenor Sax), Andrew T. Gibson (Drums) and Raoul Keith Mangrum (Percussion and Flute) met Leroy Emmanuel for the first time. Leroy had recently returned from New York’s Apollo Theatre where he had been working as a session musician in a show that showcased Dione Warwick and Timmy Shaw. Leroy by now a seasoned musician had been backing other notable blues, jazz and soul performers of the time, Betty Lavette, John Lee Hooker and Carolyn Franklyn etc. Leroy began hanging out with The Fabulous Counts and following a subsequent meeting between the original five members and their manager Fred McClure, Leroy was invited not only to join the group but due to his greater experience become its leader. Fred McClure also happened to be the manager of another notable Detroit vocal group The Singing Metros, Percy Williams, Robert Lee Suttles, Gordon Dunn, Joe Buckman and Alfred Mitchell whom he managed either side of their RCA tenure. Being the manager of both groups, McClure often used The Fabulous Counts as the backing musicians on many of the Metros live performances as well as their Pied Piper stablemate September Jones. McClure had previously been a lightweight boxing champion of Detroit. A great career was halted when he attained a dislocated shoulder in winning a fight with an opponent named Grier at the Olympia. McClure did try to fight again, but all he did was spoil a record of some fifty undefeated fights, although losing his last fight he was never floored. McClure did eventually quit the music business for a quieter life as an FBI agent! The Fabulous Counts also work frequently with Dwight ‘Spyder’ Turner after he left the vocal group, The Nonchalant’s notably featuring as the backing musicians on his R&B Billboard and Hot 100 chart hit “Stand By Me”. Originally recorded for release under the artists name Of Spyder Turner & The Fabulous Counts, The Fabulous Counts name was dropped due to contractual reasons at the insistence of their manager Fred McClure. The younger Fabulous Counts had originally just been performing cover versions of blues and jazz standards of the day had under Leroy’s leadership began to create a more funk orientated sound of their own. So armed with some of their own original material they began knocking on several local recording studios doors. It was local Detroit Record Entrepreneur Ollie McLaughlin who extended an invitation to step inside his studio to see what they had on offer. In just one take the Fabulous Counts laid down the classic and much covered funk hit “Jan, Jan”. Mclaughlin both impressed and surprised took the song to Atlantic Records suitably impressed they told McLaughlin to release it in Detroit and if the sales were favorable, they would pick it up. 110,000 copies sales later and Atlantic did pick it up placing it on their Cotillion subsidiary label. Under the supervision of producer Richard ‘Popcorn’ Wylie The Fabulous Counts had recorded a total of 3, 45 single releases for Mclaughlin’s Moira Label, Jan, Jan/ The Girl From Kenya (Moira -103), “Scrambled Eggs/Dirty Red” (Moira 105) and “Get Down People/Lunar Funk Moira (108) of which only “Scrambled Egg/Dirty Red” failed to chart. Both A and B-sides of all their 3 Moira releases featured on the 1969 Cotillion album amongst cover versions of popular songs of the day. 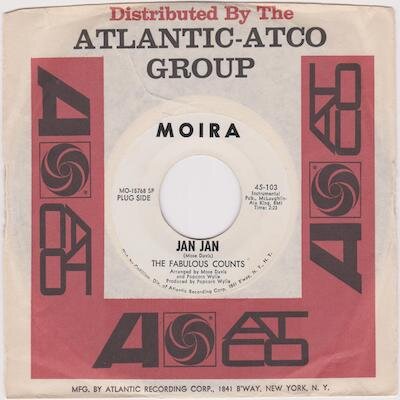 The Fabulous Counts left Moira Records during 1970 to join Armen Boladian’s Westbound label where they simply changed their name to The Counts. Charting during 1971 with their “What’s Up Front” album plus the release of a solitary 45 single “Thinking Single/Why Not Start All Over Again (Westbound 191)”. In 1972 while still part of the Westbound set up The Counts recorded two major label 45 singles under the pseudonyms of Bad Smoke Crawl Ya’ll Part 1&2 ((Chess-2124) and as Lunar Funk Mr. Penguin Part 1&2 (Bell 45-172) the latter being their biggest hit.

A subsequent move south to Atlanta, Georgia saw the group become a quartet with original members Jim White and Raoul Mangrum choosing to remain in Detroit. Now based in Atlanta they joined Michael Thevis’s Aware Records label. While with Aware they released two successful albums and a handful of 45 releases taken from each. Their first album “Love Sign” released during 1974 reached #45 on the US Black Album Charts and their final Aware album “Funk Pump” during 1975 reached #58 on the black Albums chart. The Lineup of The Counts on the Aware projects was original members Mose Davis, Leroy Emanuel, Demo Cates and Andrew Gibson with session musicians Jimmy “Junebug” Jackson Jr (Drums and vocals) and Jimmy Brown (Saxophone and vocals) being brought in to supplement the band at regular intervals. Although never officially breaking up The Counts members began to go their separate ways to explore different life opportunity’s. 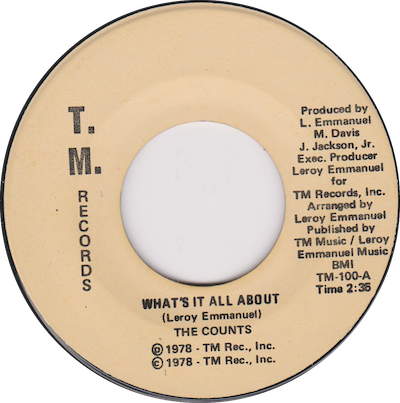 During 1978 and while still in Atlanta Leroy Emanuel borrowed some money from his family and independently recorded several tracks which he hoped to tout around to independent record labels. By now Andrew Gibson had returned to Detroit so the late Jimmy “Junebug” Jackson stepped in as the drum on these sessions alongside Mose, Demo and Leeroy with the addition of local string section. Two of the songs from these sessions “What’s It All About” and “Motorcity” did eventually gain a 45 release when Leroy stuck a deal with Terry Mendelson to release them on his TM label. The Counts had previously known Mendelson through his brother Bernie while previously employed at Westbound. The TM 45 made very little noise through poor promotion and with many of the copies having mispressed labels. Although later reissued and mistakenly credited as being two previously unissued Westbound recordings on several later CD compilations it came to light that quite a few copies of this high quality elusive 45 had found their way into avid European Soul collector’s collections. With this in mind and after several years of cajoling with Leroy Soul Junction hopes to satisfy the demand amongst fans of this desirable record. The A-side “What’s It All About” features its composer Leroy Emanuel on lead vocals with the other Counts joining in on the chorus. The B-side of this 45 release which was taken from the same 1978 Atlanta sessions is the previously unissued Mose Davis penned “Watch The Clock” which is more in keeping with The Counts traditional funk groove and features Mose singing lead vocals, enjoy.

As previously mentioned, the Counts never officially broke up and over the ensuing years have periodically reunited for occasional one-off shows. Mose Davis has remained in Atlanta and can be found playing his keyboard in the city’s airport. Leeroy Emanuel and Demo Cates later relocated to Canada with Leroy forming a new funk band called The LMT Connection which led to him frequently touring Europe pre pandemic. Demo Cates while still working as a musician also branched out into the world of acting securing parts in TV and movies including The Lion King, the musical.

Customers who viewed this item also viewed these products

To advertise here in this space:

Simply Soul have been in the music business since 1996, serving you the customer with all the latest new soul records/jazz/r&b & house music on cd & vinyl.